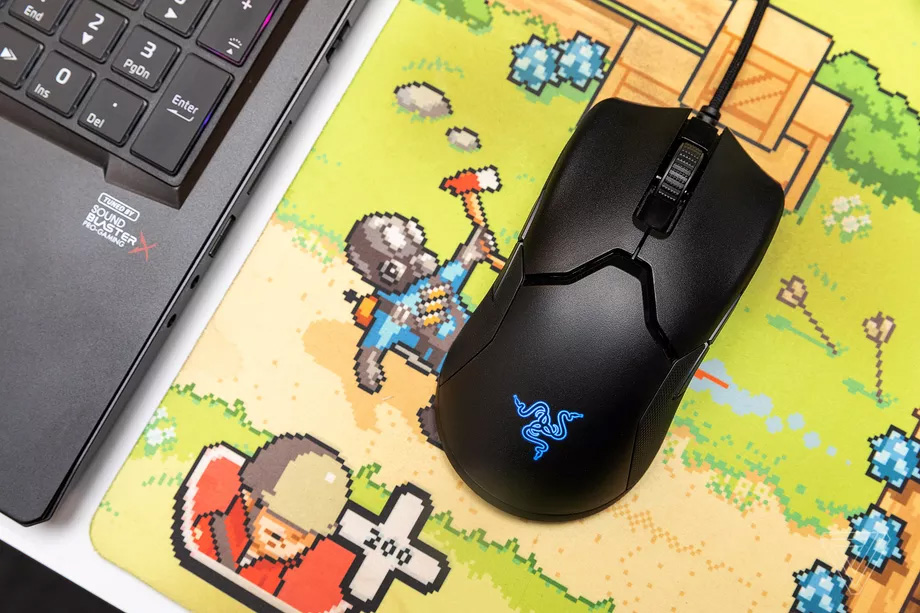 The $79 Razer Viper is the lightest wired gaming mouse I’ve ever used. It weighs just 69 grams, which I learned is the weight of two standard-sized light bulbs. What are the benefits of such a feather-light gaming mouse? It depends on who you ask. Those who prefer a hefty mouse with added weights won’t want much to do with it, but during my week with the Viper, I really liked how easy it was to flick along the mouse pad whenever the in-game moment demands some brisk, twitchy movement.

The relative weightlessness — at least compared to the Logitech G502 Lightspeed I’ve been using, which weighs 130 grams with all of its added weight installed — doesn’t come at the expense of ergonomics. The Viper molds well to my hand, and its ambidextrous design accommodates both left- and right-handed people with two macro buttons on each of its sides. It also doesn’t come at the expense of innovative hardware features.

The Viper uses optical switches in place of mechanical ones under its main left and right mouse buttons. These improve on standard mechanical switches in some important ways. Physical switches have to hit a metallic contact to send a signal to your PC, and that signal is inherently slower and sometimes more prone to accidental misfires due to the fact that they bounce several times when you press them. Optical switches are more responsive, says Razer, and more reliable than their physical counterparts.

This is Razer’s first mouse with optical switches, though it’s not the first to market on the technology. Razer says that it helps to boost the Viper’s lifespan to an impressive 70 million clicks, which is 20 million more than the mechanical switches in Razer’s DeathAdder Elite (which is featured in our best gaming mice roundup) are capable of, and generally, well ahead of where its competitors are.

Razer is also making a big deal of its new braided “Speedflex” cable leading off of the mouse. It’s lightweight, like the mouse, and its smooth texture aids in preventing snags as it glides along your mouse pad. Razer says that it’s especially useful if you use a low DPI setting and really like to make large, sweeping arm movements when you play. The fabric that wraps around the cable looks similar to what’s used on most other braided cables, but the Viper’s cable is far more bendy, and it feels more like actual fabric than other braided cords that I’ve used.

The Viper is lean in terms of features, but, unsurprisingly, Razer squeezed a Chroma LED inside. The color and lighting pattern of the Razer logo on its top can be customized in Razer’s Synapse companion app, and it’s easy enough to find a setting that looks subdued, or if you want, the complete opposite of that. The only other LED on this mouse is on the bottom where you’ll find a textured button next to it that switches DPI settings. I’m accustomed to this button being on the top of most mice that I use, but Razer said that the overwhelming majority of professional gamers wanted it on the bottom to avoid accidental toggling it during a match.

Personally, I do miss having the button on top, since I don’t play games with thousands of dollars at stake (or any dollars, for that matter), but Synapse lets me remap the buttons to my liking. Since I’m right-handed, the side buttons reserved for left-handed players are perfect candidates to handle DPI switching. It’s still a little cumbersome, but Razer’s software mostly solved this problem for me.

Like most gaming PC peripherals, the new Razer Viper is built with professional gamers, and those who aspire to be one, in mind. But this one isn’t built for all gamers. For some, its lack of a customizable weight and a small selection of macro buttons might be deal-breakers. Though, if you’re not in that crowd, the Viper’s lightweight, ambidextrous build makes it a fun addition to Razer’s lineup. And, with its optical switches advertised 70-million click limit, the $79.99 investment should last you quite some time.

The Razer Viper will be available for purchase at Razer.com and Best Buy starting today, August 2nd.