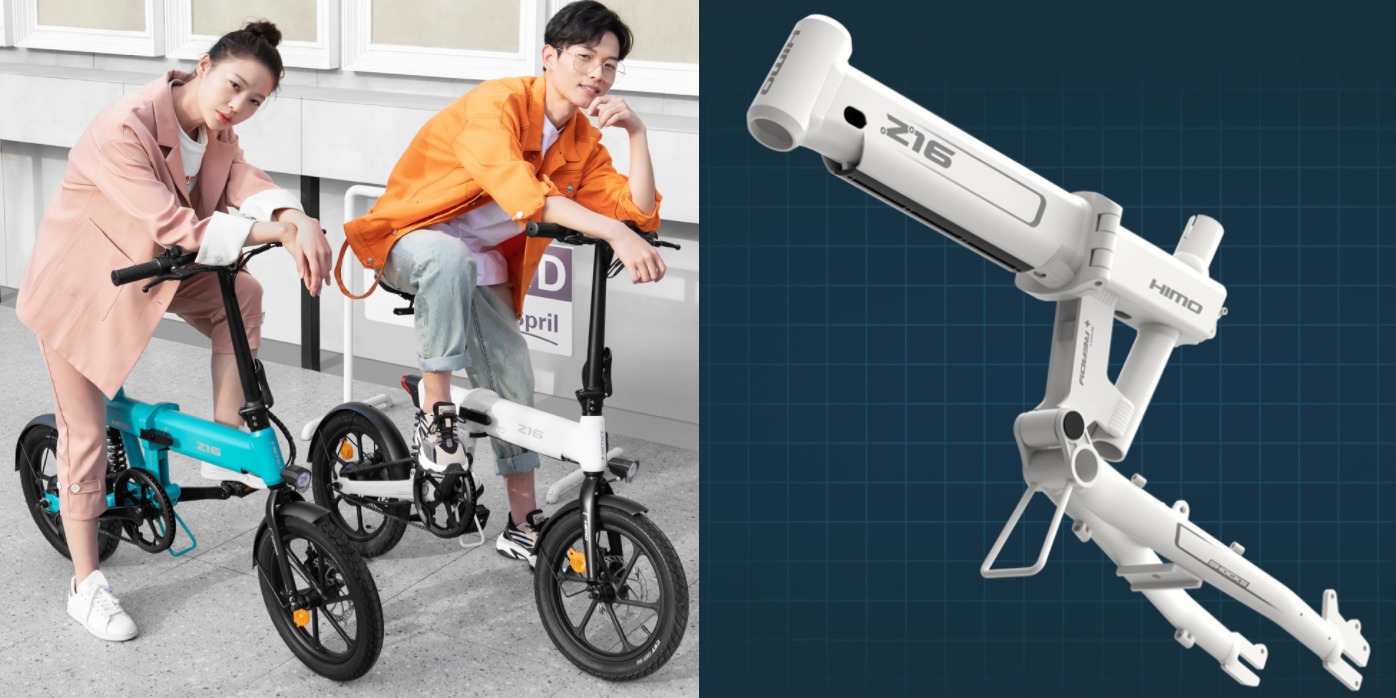 Xiaomi’s Youpin crowdfunding platform has been used to launch a number of affordable electric bicycles over the last few years. And with each new model, the bikes seem to become increasingly attention-grabbing. Take for example the new Himo Z16 electric bicycle just unveiled for $352.

At first glance, the Himo Z16 looks like several other e-bikes recently launched on Xiaomi’s platform.

But a closer look reveals a number of interesting features.

First of all, the aluminum alloy frame sports true swingarm suspension in the rear — a feature normally seen on full suspension mountain bikes, mopeds, and motorcycles.

The Himo Z16 folds in three locations (handlebars, frame, and pedals) and uses magnetic clasps to keep the bike folded during transport.

The electric bike even has regenerative braking — or at least I think it does, based on the best machine translation I could get, which resulted in: “The motor generates reverse resistance, which effectively eliminates the amount of electricity loss and increases the mileage.”

The rear wheel houses a 250W geared hub motor, though the 14 Amp controller means that the system actually pulls a peak power of 500W.

The Himo Z16’s 360Wh battery is hidden within the frame, where it is lockable and removable. The battery is rated for 55 km (34 mi) of range on throttle-only and 80 km (50 mi) of range on pedal assist, though those ranges were achieved under testing at the slow speed of 15 km/h (9.3 mph). I’d wager that the range at the bike’s top speed of 25 km/h (15 mph) is likely around two-thirds of those figures.

A 360Wh battery isn’t huge, but is actually around twice the size of a standard battery for a Himo bike of this size, especially considering the low price of RMB 2,499 (US$352). Most 360Wh batteries in the West cost as much as this entire bike.

For now, the Himo Z16 e-bike is only available within China on Xiaomi’s Youpin platform. However, many of Xiaomi’s inexpensive e-bikes have made it to the international market rather quickly.

Late last year the Himo H1 electric bike debuted on Youpin for $425. Just a few months ago, it made the jump to Indiegogo and is available internationally with only a slight price increase to $465 for early-bird customers or $499 for everyone else. And full disclosure: I actually bought one. It’s a ridiculous little e-bike, but I wanted to test it out and have some fun on it. There’s still a week left on that campaign, if you want to snag one of your own.

It’s not even the first cheap Himo e-bike I’ve bought after finding it on Xiaomi’s platform. I also picked up the $261 Himo V1. It’s a hilarious little e-bike with a few surprising features that I haven’t seen on $2,000 e-bikes in the US, such as an integrated on board charger. I did a whole unboxing and test video that just passed 1M views, if you want to check that out too.

Suffice it to say that Xiaomi’s inexpensive e-bikes aren’t just getting more popular, they’re getting better. I’m going to try to get my hands on one of these new Himo Z16 e-bikes to see how it works in the real world. But with realistic (i.e. not tiny) 16-inch wheels, rear suspension that looks decently effective, an HD LCD screen and a load rating of up to 220 lb, this is a lot of e-bike for $350. Color me impressed. I’d love to have seen a higher top speed, but Chinese laws restrict e-bikes to 25 km/h (15 mph), so this is the best we’re going to get unless they offer a derestricted model for international markets. And front suspension would have been perfect for a bike like this, though I imagine cost and weight considerations left it out.

At this price though, can you really complain about much? I’ve ridden e-bikes that cost 10 times as much and didn’t have front or rear suspension!