We are getting some rare new Tesla Cybertruck and electric ATV footage featured on the new season of Jay Leno’s Garage. 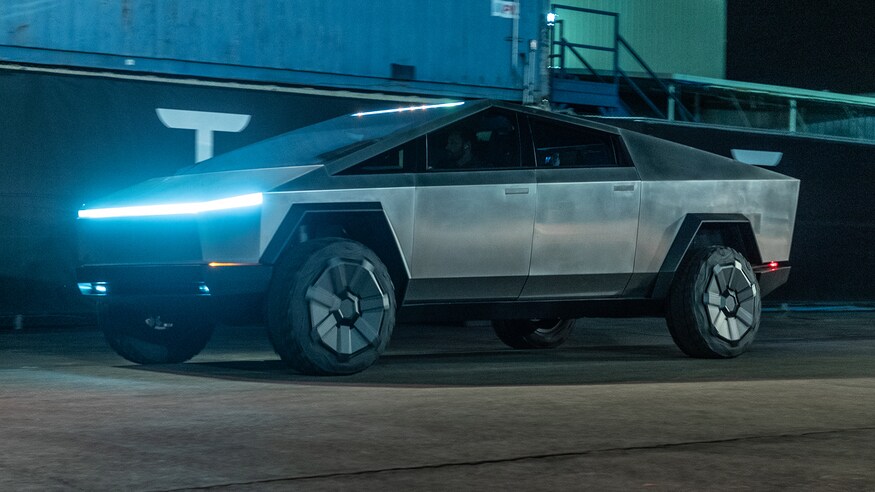 Elon Musk made some new comments about the production version of the Tesla Cybertruck, which he says will come standard with “laser blade lights” and be around 82 inches wide.

The design of the vehicle is just as futuristic as Musk warned prior to the event, but it still surprised many and remains polarizing.

Design aside, many were impressed by the specs and pricing of the Tesla Cybertruck, which starts at only $39,900 before incentives and has up to 500 miles of range with higher-end versions.

As for the dimensions, Tesla shared some details with a few of different publications:

However, the CEO said that things might change with the production version.

In a new tweet, he confirmed that the production Cybertruck will be closer to 82 inches wide:

By the way, in some prior tweets I’d said production Cybertruck would be ~80” wide (vs ~84” body width at unveil). This is slightly too small. Will be closer to 82”, but come standard with upper laser blade lights.

Musk also mentioned that the “laser blade lights” are going to be standard.

When Tesla unveiled the electric pickup truck, some analysts suggested that the headlights consisting of a single stream of light might not be up to code based on US regulations.

But we got a different look at the lights in Cybertruck electric pickup sightings around Los Angeles:

It looks like while the stream of light from the unveiling is still there, the lights are stronger at each end, making it look more like traditional headlights.

In a new comment, Musk also emphasized that “active ride height and active damping are game-changing for a truck or any car with a high max/min weight ratio.”

Cybertruck makes that possible with a new adaptive air suspension:

Raise and lower suspension four inches in either direction for easy access to Cybertruck or the vault, while self-leveling capabilities adapt to any occasion and assist with every job.

The automaker said that it plans to launch the two higher-end versions of the Cybertruck in late 2021.

Those two electric trucks will have between 300 and 500 miles of range and be equipped with dual- and tri-motor powertrains.

CEO Elon Musk said that the Cyberquad, an electric ATV, is going to be launched as an option for Cybertruck buyers at around the same time as the truck.

Tesla CEO Elon Musk treated us to another reservation update on twitter, letting us know that the Cybertruck has now broken 250,000 pre-orders.

The update comes less than a week after the truck’s reveal.

Not only is the new number huge for less than a week of sales, but the rate at which reservations are coming in seems to be holding strong.

Tesla got 41,000 reservations in ~23 hours between Saturday and Sunday.  This new number represents an increase of 50,000 in 49 hours since Musk’s last update on the matter.

That 50,000 reservations could be worth a minimum of $2 billion in potential revenue – if everyone follows through and orders the truck, even at base model prices.  Which they won’t, there will be dropouts and some will order higher option levels.

This represents a drop in reservation rate, as should be expected, but the point is that there are still a lot of people getting in line for this unreleased truck even after several days.  In general, especially with such a low, $100 bar of entry, one would expect takers to be quite front loaded. 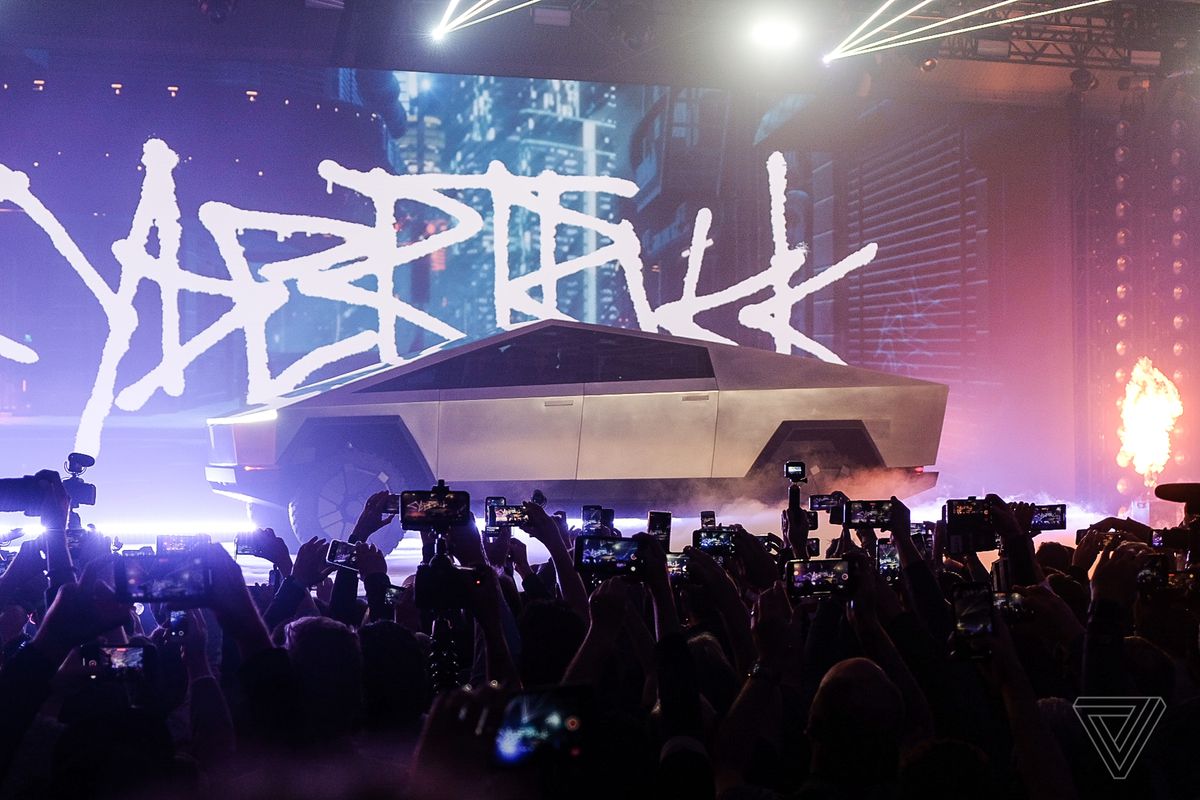 Tesla CEO Elon Musk just unveiled the company’s first electric pickup truck, also known as Cybertruck, at an event in Los Angeles, California. The truck will come in three versions with 250 miles, 300 miles, and 500 miles of range, respectively. And it will start at $39,900, Musk said. The truck won’t be rolling off the assembly line until late 2021, but preorders can be made at tesla.com/cybertruck.

Always a showman, Musk put the truck through its paces in an effort to demonstrate its ruggedness. He had Franz von Holzhausen, Tesla’s chief of design, hit the door of the truck with a sledgehammer several times, claimed it was practically bulletproof, and showed the truck winning a tug-of-war with a Ford F150 and a drag race with a Porsche 911.

However, when he tried to show how shatterproof the glass was, things went awry. A metal ball thrown by Holzhausen shattered both the truck’s windows. “We’ll fix it in post,” a sheepish Musk quipped.

Musk has spent the better part of a decade poking at the idea of a Tesla pickup truck. He tweeted in 2012 that he “[w]ould love to make a Tesla supertruck” with “crazy torque” and “dynamic air suspension.” By 2013, he told Business Insiderthat the company was actually planning to make one. The pickup was even featured in his second “master plan” for Tesla, which he published in 2016.

Musk continued to toy with the idea in public, saying in April 2017 that a reveal event would happen in “18 to 24 months.” In 2018 he said the truck had taken on a “futuristic-like cyberpunk, Blade Runner” design, and that he didn’t even care much if people didn’t like it. He’s since said the pickup truck is his favorite project out of all the ones Tesla’s working on.

While the pickup truck has obviously been a pet project for Musk, it could also be a great opportunity for Tesla’s business. Not only are pickup sales on the rise in the US, but trucks command high average selling prices and high profit margins.

“Pickup truck buyers spend a lot on their trucks,” says Tyson Jominy, vice president of data and analytics consulting at JD Power. “A $50,000 pickup truck is a very common occurrence now. People are willing to spend on this segment to haul their toys, to support a lifestyle.”

Tesla’s business could arguably use the bump. While the squeaked out a $143 million profit this past quarter, it only did so after including $164 million worth of regulatory credits and money that it’s banked from customers who’ve paid for the yet-to-be-released “full self-driving” version of Autopilot. This despite the fact that the Model 3’s profit margin continues to inch higher, and the car becomes increasingly popular around the world.

That said, a lot will happen between now and when the truck starts shipping. Not only will Tesla soon start producing Model 3s in China for the Chinese market, making it less of a burden to sell cars there, the company is also releasing the Model Y crossover at the end of 2020. One of the only segments rivaling the growth of pickup trucks over the last few years is the SUV segment (and especially the small SUV segment). If things go according to plan for Tesla, the company’s business will already be in better shape by the time the Cybertruck ships, meaning whatever profit it can reap from the pickup will be gravy.

Tesla has led the charge into long-range electric vehicles, and there’s currently no mass-market electric pickup truck available for sale. But the landscape will change by the time the truck ships. Ford has an all-electric F-150 on the way, General Motors confirmed it will put an electric pickup on the market in 2021, and EV startup Rivian — which is now backed by both Ford and Amazon — is scheduled to release its electric pickup in late 2020. Depending on how things shake out with all of these plans, Tesla could wind up releasing the Cybertruck into a market that’s already somewhat established — which would be an unfamiliar position for the company. 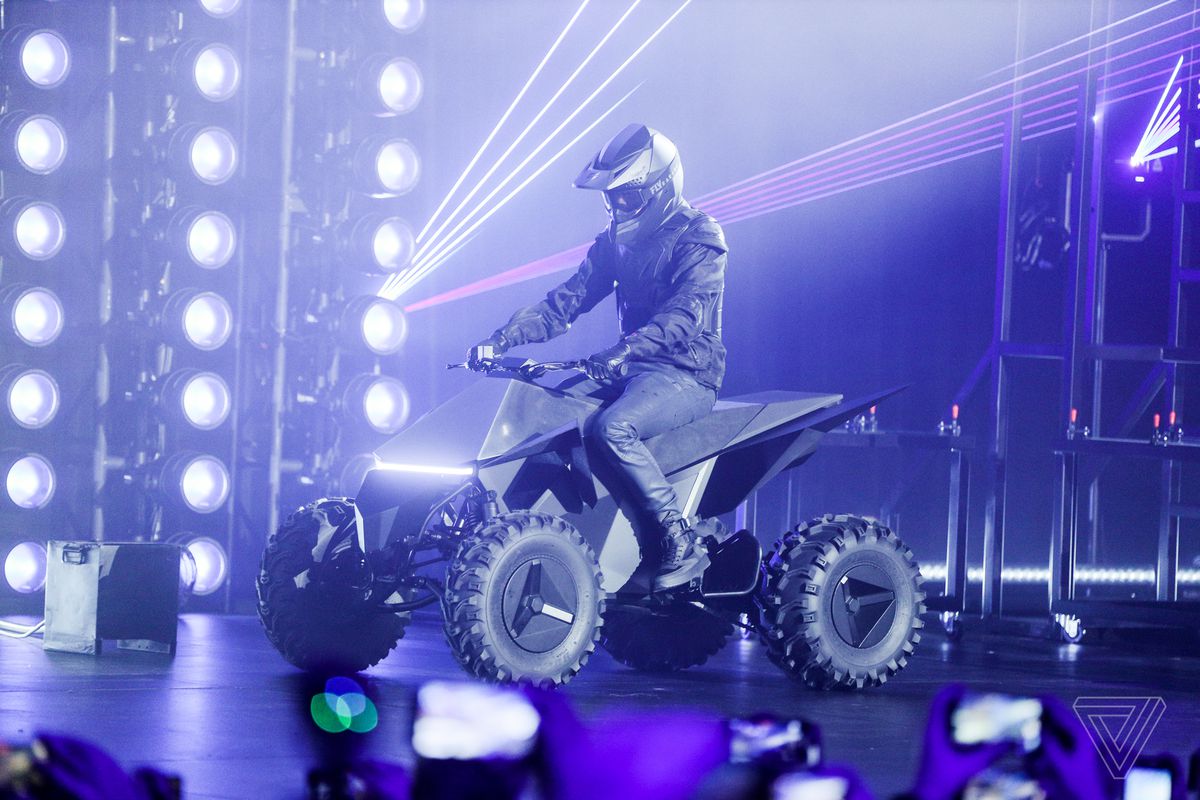 In the Cybertruck Event held today in order to unveil the long anticipated pickup track, Elon Musk threw out an ATV to compliment the futuristic vehicle.

Lets see how the other ATV and Side by side would reach from this move!

Currently there are not so many information available about the Tesla ATV but stay tuned in this space to learn more!!

What a great to start your day, eh?